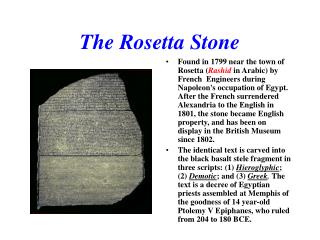 The Rosetta Stone. Found in 1799 near the town of Rosetta ( Rashid in Arabic) by French Engineers during Napoleon's occupation of Egypt. After the French surrendered Alexandria to the English in 1801, the stone became English property, and has been on display in the British Museum since 1802. CRYPTOGRAPHY - . lecture 9 language as a cipher. language. a foreign language is a great cipher – if there is no one

Ancient Egypt - . the gift of the nile. how do we know about ancient egypt. jean champollion and the rosetta stone.

Cutting for Stone - . brenna hickey and kayla smith. setting. cutting for stone. “i will not use the knife, not even on

THE RIDDLE OF THE ROSETTA STONE - By: juan s. &amp; tyler h. what i know. what i want to know. where did the rosetta

Ancient Egyptian hieroglyphics - . used on temples they are written left to right. known as pictographs there are more

MUD STONE AND SAND STONE - . mud stone…one of sedimentary stone(taisekigan). they are formed by grains of rock smaller

“If they keep quiet, even the stones will shout out” - . the contribution of archaeology in confirming the

What Makes It Possible to Purchase Stone Art Online? - It is difficult for a simple mind to believe that stone could be