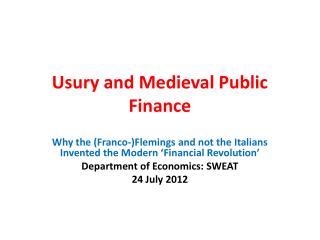 Usury and Medieval Public Finance. Why the (Franco-)Flemings and not the Italians Invented the Modern ‘Financial Revolution’ Department of Economics: SWEAT 24 July 2012. Usury and Public Finance: Introduction - 1.