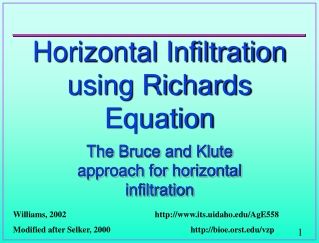 CE 394K.2 Hydrology - . infiltration reading ah sec 5.1 to 5.5 some of the subsequent slides were prepared by venkatesh

Aim: How can we approach projectile problems - Separate components. velocity, acceleration, and distance have both

Infiltration - . mark 8:34 and when he had called the people unto him with his disciples also , he said unto them,

Infiltration - . 1 corinthians 2:10 -“ but god hath revealed them unto us by his spirit: for the spirit searcheth all

Groundwater Hydrology - . where does the water come from to start?. water cycle replenishes the groundwater infiltration

The Dirac Equation - . origin of the equation. in qm, observables have corresponding operators, e.g. relativistically, we