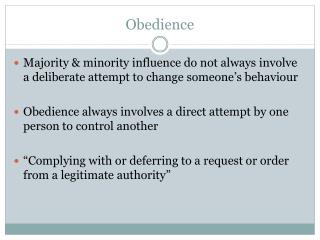 Obedience. Majority & minority influence do not always involve a deliberate attempt to change someone’s behaviour Obedience always involves a direct attempt by one person to control another “Complying with or deferring to a request or order from a legitimate authority”. Studies of Obedience. How to Print - . reference books. family and social morality (the fourth commandment). rule of relationship. the fourth

Chapter 14 - Groups - . obedience/cooperation what groups are and do groups, roles, and selves group action how groups

The Path of Truth to Life Bible Translation Project - . discussion of the law 2 legalism opposed to obedience. gerrie c

PSYCHOLOGY 20 - . review from last week: definition of psychology what do research psychologists do? two elements of a

Dear Mrs. LaRue - . letters from obedience school. lindac/callison/2011. other books by mark teague. . . . and many more.