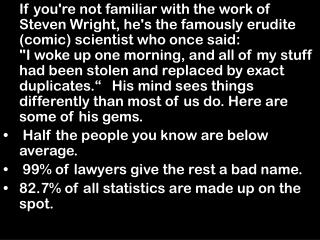 If you're not familiar with the work of Steven Wright, he's the famously erudite (comic) scientist who once said: "I woke up one morning, and all of my stuff had been stolen and replaced by exact duplicates.“ His mind sees things differently than most of us do. Here are some of his gems. A 'clear' conscience &amp; a 'clean' conscience: - . &quot;you are already clean because of the word which i have

TITLE: How to Have a Clear Conscience - . text: hebrews 9:1-15 theme: the believer should find a clear conscience in the

What are the Sign of a Bad Alignment? - Al ghassan auto balance workshop sharjah, uae offers professional and competitive

The Echo of A Sign - . a message. and he said, yhwh, to me, “take to yourself a great tablet of papyrus and write upon

What is a memory? - . by: chantelle wendland. something you remember. i remember how long it took for all of my cousins

Is Commercialization Of Education A Bad Idea? - Study khazana is an e-treasure of knowledge and education with one aim of

Is Male Organ Odor a Sign of a Medical Condition? - When the pants come off, no guys wants to have male organ odor be the

This is a popular proven fact that travelling is usually a entertainin - When you are traveling, never ever acquire an

What is a MEMORY PLAY? - . consider. how/why do memories arise? why do you remember some things and forget others? do you

Antithesis - the exact opposite of something or someone - . the poem reflects the antithesis between good and evil . his