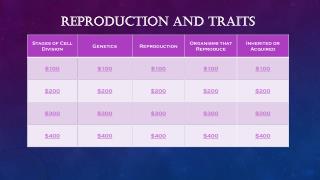 TEAT NUMBER AND ITS RELATIONSHIP TO FEMALE REPRODUCTION TRAITS

Traits and Probability - . genes. a gene codes for a specific trait (ex: eye color) alleles of a gene are the different

Traits and Inheritance - . http://glencoe.mcgraw-hill.com/sites/007874184x/student_view0/brainpop_movies.html#. a great

Traits and Inheritance - . genetics part 2. objectives: i can: • explain how genes and alleles are related to genotype

Mendel and Traits - Introduction to genetics. mendel and traits. genetics is the study of heredity!. gregor

Traits - . nature and nurture. thousands of different traits make you who you are. some traits are determined mostly or

Contraception and Reproduction - Aquinas . sex is a serious sin except within matrimony long term (permanent?)

REPRODUCTION and GENETICS - . teks 7.14b – compare the results of uniform or diverse offspring from sexual or asexual

Traits and How They Change Traits and the Environment - . what are traits?. observing traits traits are features

REPRODUCTION AND DEVELOPMENT - . every species depends on it for survival!. reproduction can be…. asexual *think