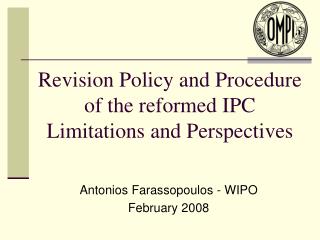 Revision Policy and Procedure of the reformed IPC Limitations and Perspectives Revision Policy and Procedure of the reformed IPC Limitations and Perspectives. Antonios Farassopoulos - WIPO February 2008. Main features introduced by the Reform. influencing the IPC Revision policy and procedure:. Separation of the IPC into Core and Advanced levels

Revision Policy and Procedure of the reformed IPC Limitations and Perspectives

Work Permit Procedure - . objective this procedure shall ensure that work identified as potentially hazardous is

AIRCRAFT KNOWLEDGE - . revision questions press f5 to start. revision. this presentation may be used either as a revision

HUMAN PERFORMANCE AND LIMITATIONS I - . lecture one: everything you need to know!. 1. basic concepts. 2. hypoxia

Policy and Procedure I - . training for campus bookkeepers. overview. this is the first in a series of mandatory training

Malpeli Revision - . 1 - 99. 1. the recommended activity levels for adults (cdhac) are: a: combining short sessions of

Revision of P1 - . learning objective : recap all of the physics content with past paper questions. index. revision of

Credit System: Concept, Policy, Practice and Procedure - . today should be better than yesterday. scope for discussion.