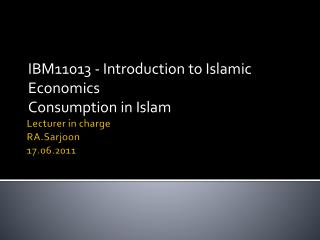 IBM11013 - Introduction to Islamic Economics Consumption in Islam. Lecturer in charge RA.Sarjoon 17.06.2011. CONSUMPTION. Principles of Consumption Human Wants and their Satisfaction Moderation and not Extravagance or Miserliness Lawful and Unlawful ( Halal and Haram ) Standard of Living.

Charge and Polarization - . charge charge comes in two forms, which ben franklin designated as positive (+) and

Lecture A - . fundamentals and background. charge. “charge” is the basic quantity in electrical circuit analysis

WRITING CHARGES - . charge or labelelementsspecifications. charge/label. the labeling of the act(s) of misconduct an

Who's Really In Charge? - . july 6. think about it . . . what is happening in our community, our nation, in the world