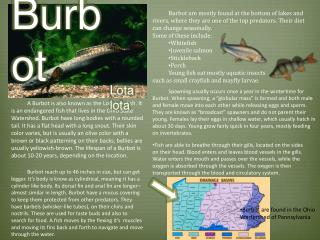 Burbot. Burbot are mostly found at the bottom of lakes and rivers, where they are one of the top predators. Their diet can change seasonally. Some of these include: Whitefish Juvenile salmon Stickleback Perch Young fish eat mostly aquatic insects

A Description of the Commercial Fishery on Lake Superior in 2000 - . mark p. ebener chippewa/ottawa resource authority.

Advocacy - . affordable care act, the supreme court and what lies beyond james fasules, md, facc. aca, scotus and beyond:

Fish of the Great Lakes - . habitat. depends on age and type of fish most prefer rocky, clear water stream beds as babies

Startup Tips and Tricks: Getting a Small IT Shop Off the Ground - . presenter: kevin grossnicklaus august 6 th , 2011.

Welcome to Session 7! - . continuing family relationships. “parking lot”. are there any questions from previous

William Shakespeare’s “A Great big fuss over not a lot’ Or ‘Much Ado about Nothing’ - . what is your first

Tudor foods - . the rich and the poor. this presentation is all about tudors and the food they ate!. tudor food. the