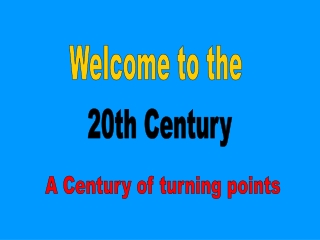 Welcome to the. 20th Century. A Century of turning points. The Death of Queen Victoria. Most of Europe is ruled by monarchies The beginning of the century is called the ‘Belle Epoch’ – the beautiful era People are very positive about the new century – what will it bring?. The Titanic.