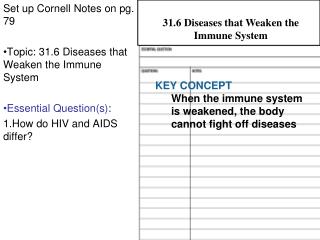 Set up Cornell Notes on pg. 79 Topic: 31.6 Diseases that Weaken the Immune System Set up Cornell Notes on pg. 79 Topic: 31.6 Diseases that Weaken the Immune System

Cornell Notes AAA Lesson - . student version. why should you take notes in class?. to minimize your “rate of

Cornell - . notes. quickwrite question :. how can note-taking skills contribute to your success?. why should you take

Why Cornell Notes? - . cornell notes are a requirement in mr. joyet’s classroom, either during a power point

Summary: … (Prompting question: How was/is gravity important to our solar system?) - *** remember to look back at the

The Immune System - . the job of the i mmune system. the immune system protects our bodies from a variety of pathogens

Infectious Diseases and the Immune System - . “what doesn’t kill you makes you stronger.”. types of pathogens.

Cornell Notes 101 - . the hidden curriculum. what do you know about cornell notes? on a scale of 1 to 10, how often do