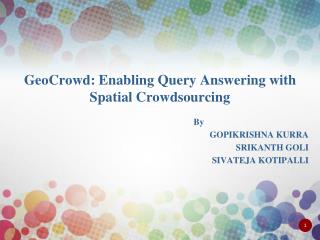 Crowdsourcing - . how to do it the right way. applications - benefits - challenges - how to do it right. so... what is

Cooperative Query Answering - . based on a talk by erick martinez. motivation:. responses to queries posed by a user of a

Can I use crowdsourcing to process my data? - . maxine eskenazi language technologies institute carnegie mellon

Answering Queries using views: A survey - . the problem…. we have a schema a and a set of materialized views v1,

Answering Queries Using Views: The Last Frontier - . the problem. given a query q and a set of view definitions v 1

Crowdsourcing in Danish Archives - . asbjørn hellum, denmark. what is crowdsourcing?. - more than an easy way to save

Spatial Databases - . reading: none. in this lecture you will learn. the need for spatial databases some of the special

And it wasn’t just this evening that I experienced God’s presence and Him answering our prayers. - This was my second