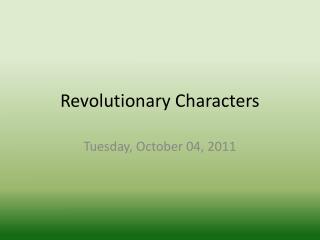 Revolutionary Characters . Tuesday, October 04, 2011. Warm Up . What are the three parts of the Declaration of Independence? What does each part contain? . Housekeeping . CNN Report Check Cloze Notes: these will be a study guide for you. Great responses yesterday on

Animal Farm vs. Russian Revolution - . english i honors. first, some important terms…. totalitarianism : a kind of

Significant Individuals of the Revolution - . king george iii. king of england (great britain) during the american

Nancy Hart - . a georgia patriot. nancy hart. nancy was a patriot who became famous for her efforts to rid the area where

Siege of Savannah - . at this point of the war, the british controlled savannah. james wright, the popular and final

Foil A literary term - . by julia crowell, jamie orlando and kayleigh macdonald. definition. a foil is a character who is

Character Analysis in A Tale of Two Cities

Characters - . farmer jones a drunk and a poor farmer, his cruelty towards the farm animals inspires their rebellion. mr.

The Age of Reason/ The Enlightenment/ The Revolutionary Period - . 1750-1820’s. what is enlightenment / the age of

The Old Regime : Class Structure and Characteristics - . major features. pre-revolutionary europe can be described by