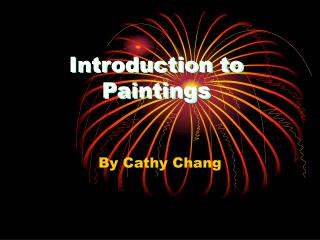 Introduction to Acrylic Paint - . the basics. acrylic paints are polymer-based, which means they are made of molecules

OP ART - . introduction:. op art made its appearance in the united states and europe in the late 1950s. op art, also

Introduction to Art History - . what is art?. marcel duchamp, fountain , porcelain and black paint, 1917. is this art?.

Magical Realism and Paintings - . comparison between definitions. origins of magical realism. m.r. began as a movement of

Art History - Timeline. art history. how did it all start?. art began over 27,000 years ago as humans became smarter

Art Appreciation - . week 1: introduction to the course the nature of art (ch. 1) awareness, creativity, and

Silk Painting - . crafts. what is silk painting?. silk painting is creating art on fabric with silk as the canvas.

An Introduction to Art - Paintings through the ages . people have been painting for millions of years.the australian

You Wont Believe These Facts About Cats - Are you thinking about getting a beautiful portrait of your pet? an artist by