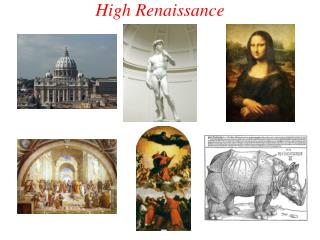 High Renaissance. Basilica of Saint Peter. known in Italian as the Basilica di San Pietro in Vaticano one of four major basilicas of Rome ( Basilica of St. John Lateran , St. Peter's, Santa Maria Maggiore and St. Paul outside the Walls ) High Renaissance - . sponsored by the popes and cardinals who vowed to transform rome michelangelo ’s ceiling of the

PATRONAGE IN THE HIGH RENAISSANCE - Patronage. kinds of patronagecivic from government or groups in society such as

By Ken Journigan Olympic High Astronomy-Renaissance - . the history of astronomy. warm up. what is a geocentric model of

Renaissance - . the development of mathematics almost stopped between the fourteenth century and the first half of the

Renaissance - . the renaissance was a period of time in history that took place between the years 1350 and 1600 this

Renaissance - . review. 1400 – 1600. battle of hastings depicted in the bayeux tapestry which we associate