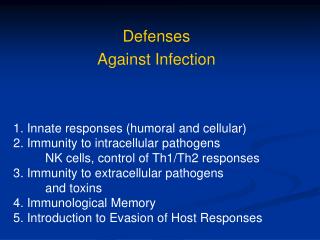 Defence Against Disease - . noadswood science, 2011. defence against disease. to understand how the body defends itself

The Immune System - . pathogen : viruses, bacteria, and other microorganisms that cause disease are called pathogens.

Immunity to microbes (mechanisms of defense against viral, parasitic and fungal infections) - . goal. to understand basic

Defense Against Infection Disease - . skin and mucous membranes. both prevent pathogens from entering the body by

Human Defenses A gainst Infection - . fighting off the “bad guys”. the body possesses many mechanisms that impart

Defenses Against Disease - . if pathogens are everywhere, why aren’t you sick all of the time?. when you do get sick,

Defense Against Infectious Disease - . how does my body fight disease?.

THE BODY’S DEFENSES AGAINST INFECTION - . the body’s defenses. your first line of defense- your skin and fluids forms

The Immune System - . introduction. immune system the body’s defenses against pathogens that produce disease 2 types of