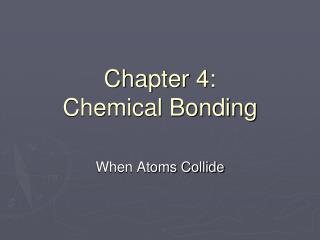 Chapter 4: Chemical Bonding. When Atoms Collide. Unit Objectives. To be able to: Explain why some elements react (form bonds.) Explain the difference between an ionic & a covalent bond. Demonstrate e- reconfiguration when a simple compound is formed.

Chapter 1 Chemical Bonding and Chemical Structure - . the branch of chemistry that deals with carbon based compounds

Chemical Bonding - . chapter 6 pages 174-213 (no section 4). the breaking of bonds and the forming of bonds occur during

Chemistry 104 Chapter Four - . chemical bonding: the covalent bond model. you will be able to:. compare and contrast

Chapter 11 Chemical Bonding - . forces that hold atoms together. the nature of bonding. there are several major types of

CHAPTER 12 – CHEMICAL BONDING - . chemical bond – a force that holds two or more atoms together as a unit individual