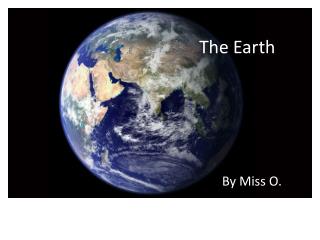 The Earth. By Miss O. 3 rd planet from the Sun . 1 of 4 rocky planets. not a considered a planet at this time. About 150 million kilometers from Sun (93 million miles away). Five Things Make the Earth a “Habitable Planet” in the Universe!.

Inside the Earth - . saturday science. crust. this is the thin, rocky layer we think of as earth’s surface. its

The Earth’s Atmosphere - . what holds the earth’s atmosphere to the planet?. gravity . development of the

The Earth as Humanity’s Home - . chapter 3 part 1- the organization of humanity . spaceship earth . the term spaceship

The Earth - . rotation of the earth. the earth rotates about an imaginary line that passes through the north and south

The Earth: A blessing for Mankind - . by: zainab and zahra class

The Earth as a Planet - . what makes earth unique? what characteristics does earth share with the other planets of the