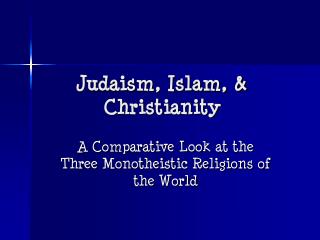 What Is Christianity? - A review of the essentials prof. felix just, s.j. introduction: christianity is a major world

The World of Islam Test Review - The world of islam. what did islam, judaism and christianity have in common(5)what is

What Is Christianity? - . a review of the essentials prof. felix just, s.j. introduction: . christianity is a major world

Monotheistic Religions - . judaism, christianity and islam. judaism. history. founded by abram in 1800 bce in ur in

Introduction to Judaism - . judaism was the first monotheistic religion both christianity and islam have their roots in

Intro. To Christianity - . rooted in judaism. founded in 33 ce separated from judaism after destruction of second temple

Islam - . i am the light of the world. he who follows me shall not walk in darkness, but have the light of life. john

Islam - . pg 263-268. muslim. a person who practices the religion of islam is a muslim religion = islam person = muslim

JUDAISM AND CHRISTIANITY: NO HOLDS BARRED – SESSION 1 - . “ his blood be on us and on our children ” christian