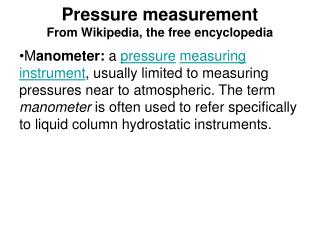 Measurement of Pressure Manometry - . • use liquid column in vertical or inclined tubes • hg barometer is an example

Foundry - Wikipedia, the free encyclopedia - A foundry is a factory that produces metal castings. metals are cast into

Blood Pressure measurement - . “the measurement of blood pressure is the clinical procedure of greatest importance that

Pressure Measurement By Manometer - . the piezometer tube manometer the simplest manometer is a tube, open at the top,

From ebooks to Wikipedia the Musical - . dorcas hand – feb. 2, 2012 – isasw conference, houston. how do ebooks fit in