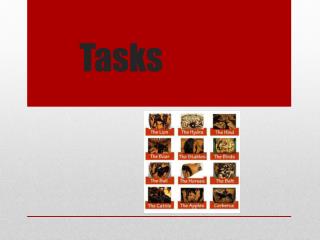 Tasks . Task: to kill a beast that count be killed with no weapons Hercules solved it by choking him. 1. The Lion of Nemea. A nine headed creature Lived in a swamp One of the heads was immortal so every time Hercules would cut one head, two would grow in its place. Creating Audio Tasks and Projects with Learners - Find resources at

Compare and contrast the terms ‘phases’, ‘steps’, ‘techniques’, and ‘deliverables’ as used in systems

Researching tasks in primary and secondary foreign language classrooms - . fun people: who we are f orschungs- u nd n

4 – Divided Attention divided attention trying to do two things at the same time Some dual tasks cause no - E.

New Perspectives on Microsoft Project 2007: Creating a Project Schedule - . in this tutorial you will:. start a new

Treatment of Word retrieval impairments: Do we know which tasks work for whom and why? - . associate professor lyndsey

Introduction to Public Budgeting - . november 17, 2012. what is budgeting?. budgets link tasks to be performed with the