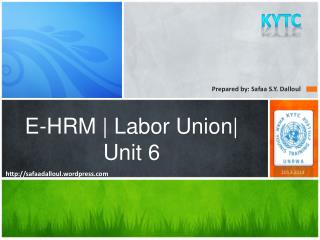 Labor Union - . a labor union is an organization of employees that uses collective action to advance its members’

Labor Union Ideas - . intro. you and i have seen that firms that want to hire labor take a good look at the marginal

What’s a Labor Union? - . who and what determine wages and hours?. labor unions represent the needs of workers to

Union-Management Labor Relations - . union a formal association of workers that promotes the interests of its members

Topic 6 labor - Mr. kallusingh. topic 6 labor. is the total number of people eligible to work that are employed or

Lesson 6- 6: Labor Relations - . learning objectives. after completion of this lesson, participants will be able to:

APUSH Review: Labor Unions - . everything you need to know about labor unions to succeed in apush. an important court

Chapter 14 Understanding Labor Relations and Collective Bargaining - . introduction. a union is an organization of