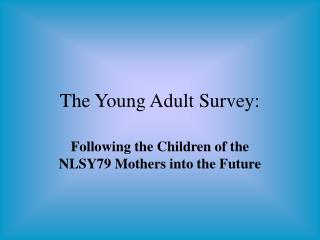 The Young Adult Survey:. Following the Children of the NLSY79 Mothers into the Future. Beginning of the YA Survey. Began in 1994 Designed to follow the NLSY79 children as they approached adulthood Children “age up” when they will turn 15 by the end of the current survey year MODELS FOR SINGLE ADULT AND YOUNG ADULT MINISTRY - . exploring the options… discovering what is right for your

ADULT PROGRAMS - . wanted: dead or alive?. why do adult programming ?. what is driving your need to do adult

Genres for Young Adult Literature - . definition of genre classes of genre how to approach them with young adults betty

HIP PAIN IN THE YOUNG ADULT - . mazloumi md. as early as 1965, murray described the subtle “tilt deformity” of the