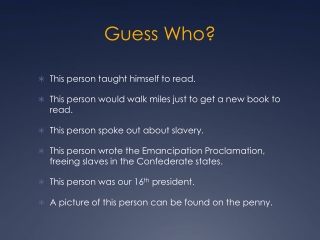 Guess Who Harcourt Trophies 1-1 - . high frequency words by ms. ross www.msrossbec.com. down. got. up. and. in. oh. yes.

Guess who I am! - . i give you a ticket when you drive too fast. who am i?. firefighter. police officer. guess who i am!.

Guess Who... - Guess who. i am brave enough to fight in battles. i came from lancaster. i had 2 sons, but one died. i was

Guess who has Fancy Feet? - . by kauri 2. can you guess whose feet?. i had rocket shoes. they were orange and it was

Guess Who! Guess Who My tribe lives In the Post Oak Belt - My tribe moves a lot and lives in tepees my tribe eats fish

Guess Who… - . rules yes or no questions only one question per person whiteboards: brainstorm questions you will ask to

Character Guess Who! - . by sarah barz period(s) 6/7. basic info. father left when i was young. i have a big sister and a

Guess Who - . by: caitlyn tjarks. early life. my person was born in paris, france to jacqueline l. and chris w.

Guess Who? - . game show host: madison lanier. guess who changes color to survive in their habitat? a) toad b) hare c)

MISSION IMPOSSIBLE: Guess who? - . by hannah skaran. childhood. born in liverpool, england in 1940 named after winston

Guess Who? Smile Edition! - . directions : take a minute to look at the adorable smiles up front! see if you can guess