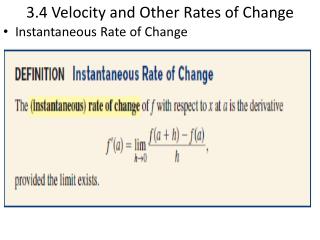 RATES OF REACTION - . chemical kinetics : - study reaction rates - how these rates change depend on conditions -

Acceleration - . if you remember, velocity is a speed in a specific direction.acceleration is a measure of how quickly

Speed, Velocity, and Acceleration - . “i feel the need, the need for speed!”. speed. speed, velocity, and

Lecture 2 - . exchange rate determination. some basic questions. why aren’t fx rates all equal to one? why do fx rates

Motion in a Plane - . chapter 3. position vector. goes from the origin to the object – point p. average velocity

Acceleration- - . the change in velocity due to a force. a skydiver jumps out of a plane…. describe the skydivers

Related Rates - . mrs. erickson. related rates. you will be given an equation relating 2 or more variables. these

ACCELERATION - . acceleration. vector quantity which measures how velocity changes over time determined by the difference