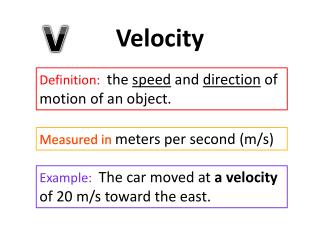 v. Velocity. Definition: the speed and direction of motion of an object. Measured in meters per second ( m/s ). Example: The car moved at a velocity of 20 m/s toward the east. a. Acceleration. Definition: the rate of change in velocity as a function of time.

10/16 do now - . a racing car is moving around the circular track of radius 300 meters shown. at the instant when the

Determinants of the velocity of money, the case of Romanian economy - . dissertation paper student: moinescu bogdan

RSPT 1060 - . module c lesson 5 gas movement. objectives. at the end of this module, the student will define terms