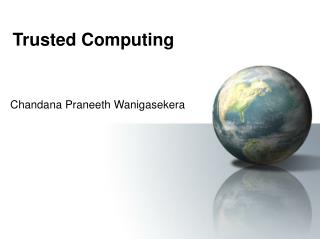 Trusted Computing. Chandana Praneeth Wanigasekera. Introduction. jetBlue The need for systems that can be trusted Embedding Privacy Policy into the applications that use Sensitive Information Credit card machines. PII. You can still retain control Expiration Trusted Computing - . or how i learned to stop worrying and love the mpaa. trusted computing. overview of tcp how it