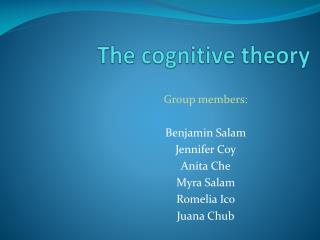 A Cognitive Theory of Everything: - . the lida technology as an artificial general intelligence. stan franklin and the

The Cognitive Load Theory - . “a theory that focuses the load on working memory during instruction .” john sweller .

The Social-Cognitive Theory of Personality - . social-cognitive theory of personality: what is it?. proposed by albert

Cognitive Theory - . coleen beisner jonathan lorenz. what does the theory mean?. activities like thinking and remembering