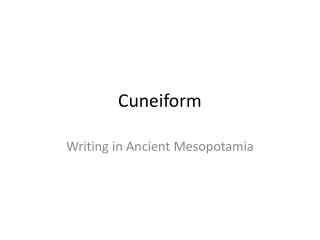 Cuneiform. Writing in Ancient Mesopotamia. Warm Up. Think back to what you learned about ancient Sumerian society last week. What do you think the artifact on the next slide shows?. Standard of Ur. What is going on on the top row? Why are some figures larger than others? Cuneiform - . the legacy of mesopotamia: cuneiform . how many of you know what barley is? how is it used? what does it

Cuneiform - . by aidan thompson and brodie worden. origins – early development. long before the development of writing,

Hero's and Cuneiform - . hero's. think of your favorite hero what values does the hero express and show? what do those

Cuneiform and Tokens - . by: jessica erjavec and caroline crea. questions. how has the study of these tokens helped

Cuneiform : The World ’ s First Writing System - . pictograph definition: a picture that stands for a word or idea;

Ancient wedgies: cuneiform and the origins of writing - . the origin of cuneiform signs. tokens: the first book keeping