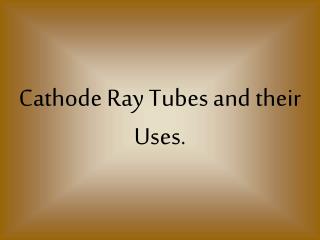 Cathode Ray Tubes and their Uses.

Cathode Ray Tubes and their Uses. Thermionic Emission. Electrons flow in electron clouds in metals. The electrons easily leave the surface of hot metals – as they gain enough energy from the heat to overcome the attraction of the nuclei.

Cathode Ray Tubes and their Uses.

CRT - . crt (cathode ray tube)- crt is one of the first televisions out. it was used by an electron gun inside a glass

Cathode rays - . how are cathode rays produced in a discharge tube? what is the principle of thermionic emission? what is

X-ray tube - . the tube consists of cathode and anode enclosed within the glass envelope (pyrex glass) or metal envelope

Electron Deflection - . how does a tv or computer monitor work? there are different technologies that can be employed, 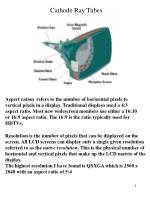 Cathode Ray Tubes - . aspect ration refers to the number of horizontal pixels to vertical pixels in a display.

The Cathode Ray Tube (CRT) - . how it works…. electrons are boiled off in the cathode (negative terminal) electrons are

X-ray tube - . dr. roentgen used a crookes-hittorf tube to make the first x-ray image. there was no shielding so x-rays