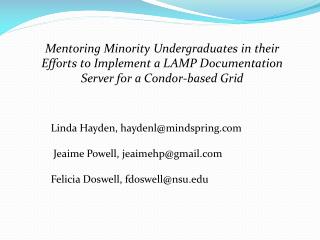 Condor-G Stork and DAGMan An Introduction - . outline. background and principals the story of frieda, the scientist using

Selenium Grid and Jenkins - . outline. why selenium grid features / components of grid grid node and grid hub why we

Using Condor An Introduction Condor Week 2010 - . the condor project (established ‘85). research and development in the

HAPTER 3 - . systems development and documentation techniques. introduction. questions to be addressed in this chapter

View Based Documentation of Software Architectures from “views and beyond “ by Clements and lots of people - . uses

mentoring (modern) powerpoint presentation content: 146 slid - Mentoring has been widely recognized by top firms as an