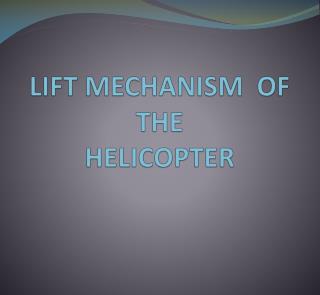 LIFT MECHANISM OF THE HELICOPTER. INTRODUCTION. A helicopter is an aircraft that is lifted and propelled by one or more horizontal rotors, each rotor consisting of two or more rotor blades. The Helicopter - . helicopters generate lift by rotating its wings!! a cross-section of a rotor blade has an aerofoil

The Apache Helicopter - . by max joelson and matt roskiewicz. how it works. it works the same as a usual helicopter. it

The Mechanism of Breathing - . l.o: to describe the steps in inspiration and expiration to define and

The mechanism of RNAi - . by renchang. guo s et al, a gene required for establishing polarity in c. elegans embryos,

The Spirit of Mechanism - . 17 th to 19 th century zeitgeist reflected in: amusement with mechanical figures the universe

helicopter - . by: jala and tara. helicopter. description. describe how the transportation device works a helicopter is a

The mechanism of ADE - . s58941418 陳俊良. antibody-dependent enhancement (ade). ade has been proposed as an

Helicopter - . subway. ambulance. fire engine. mind game. one day, you are going to visit your friend. how will you get

Simulation of the 2-dof Helicopter - . maryam alizadeh may 25 th 2011. contents:. why the simulation is needed? how is it

Helicopter Views of the Iguazu Falls - Adventure seeking honeymoon couples also have a lot to cherish. one among those

Anatomy of the Sensorineural Mechanism - . the bony labyrinth. zemlin (1998). three main subdivisions of the