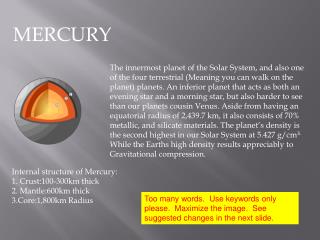 MERCURY - . the innermost planet. conjunction. inferior conjunction – inferior planet and earth on same side of sun

Mercury - . under the waves: a look at mercury in fish ashley mcelroy walden university pubh 6165-6. what is mercury?. is

Mercury - . by: brendan stang. planet’s symbol. how did mercury get it’s name?. it got it’s name from the roman god

Mercury - . by: megan otto. mercury’s symbol. symbol is similar to what the god looks like: mercury/ hermes, messenger

MERCURY - . by: j ason 7.1. introduction. hello my name is jason and i chose the element mercury. i chose to do mercury

Mercury - . a scorched and battered world. starter. take a moment and imagine yourself on mercury, what would you see?

Mercury - . the sun. mercury is the closest planet to the sun even though it is only 36 million miles away from it. did