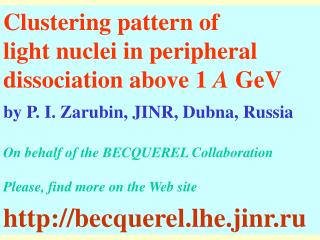 Clustering pattern of light nuclei in peripheral dissociation above 1 A GeV by P. I. Zarubin, JINR, Dubna, Russia On behalf of the BECQUEREL Collaboration Please, find more on the Web site http://becquerel.lhe.jinr.ru. Investigation of Coherent Dissociation 10 C Nuclei at an Energy of 1.2 A GeV - . mamatkulov kahramon lhep, jinr,

Pattern-based Clustering - . how to cluster the five objects? hard to define a global similarity measure. what is

Experimentral studies of clustering in multifragmentation of relativistic nuclei - By p. i. zarubin, jinr on behalf of

A-V DISSOCIATION - . due to default. a-v

&quot;Tomography&quot; of nuclear structure in dissociation of relativistic nuclei P. I. Zarubin - V. i.

Dissociation - 2. uninsured veterans. 1.8 million veterans were uninsured in 2004 and an additional 3.8 million members