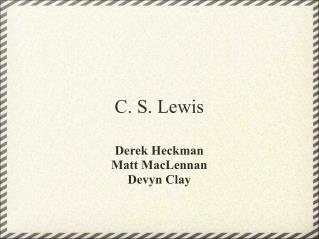 The Lion, the Witch and the Wardrobe by C. S. Lewis - . presented by annie williams and julio angeles. about the author.

The Real C.S. Lewis Screwtape Letters, Theological “You’ll never get to the bottom of him.” - Lagrave avenue

C.S. Lewis’ Case for Christ - . mere theology (by will vaus) case for christ (by art lindsley) mere christianity (by

In God We Trust - . 1 peter 5:5-14. embrace humility. elders be shepherds don’t be kings youngers be sheep don’t be

Archetypes of The Lion, the Witch, and the Wardrobe by C. S. Lewis - . by: caroline ririe emma strickland dino rodriguez

The Meaning and Reality of Hell Parable of Lazarus and the Rich Man Luke 16:19-31 - . understand the nature of sin.