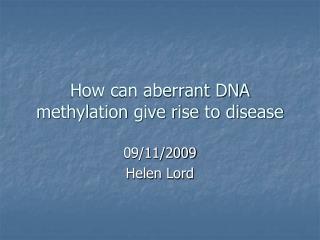 How can aberrant DNA methylation give rise to disease How can aberrant DNA methylation give rise to disease. 09/11/2009 Helen Lord. What is methylation. Cytosine methylation is the most common DNA modification in vertebrates Only ~3% of cytosines in human DNA are methylated Most of this occurs at CpG dinucleotides

How can aberrant DNA methylation give rise to disease

How to Give a Khutbah - . mohamed-umer esmail. overview. khutbah evidence from quran, hadith, and ijma arkan (integrals)

How to Give a Talk - . amy bruckman georgia institute of technology. start with a story. not a joke if you can’t think

How to Study DNA - . genetic material expression product. what is gene expression?. the activation of a gene that results

How to give Feedback? - . feedback. the purpose of positive feedback is to solve the problem, improve the situation,

Aim: How can we analyze DNA? - Do now: 1. what are the advantages of selective breeding? give an example. hw:. aim: how

How to Give a Talk - . why listen?. people fear public speaking you will speak for class, work, thesis defense another

DNA CANCER and DISEASE - . our dna makes up our chromosomes that are found in every cell of our bodies, all 100 trillion

How to Give Online - . first - log in using your vunet id and epassword. there are only 3 easy steps. step 1 - select how

Cancer Epigenetics: Overview of the Role of DNA Methylation - Epigenetics . heritable change in pattern of gene