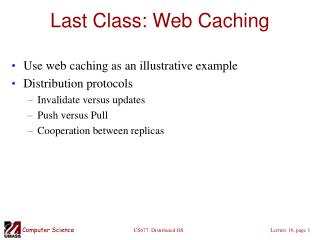 FINAL THOUGHTS - . after the seminar, write a page in which you clarify your interpretation of the big questions posed in

Final Thoughts - . -overall, outcomes in all have come a long way since the sixties -although we can achieve dramatic and

Multiprocessor Cache Coherency - . cs448. what is cache coherence?. two processors can have two different values for the