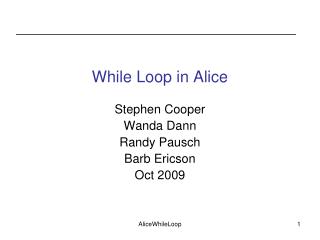 While Loop in Alice While Loop in Alice

An Introduction to Alice - . by jenna hayes under the direction of professor susan rodger duke university, june 2009.

Programming: Simple Control Structures - . sec 46 web design. control statements. we have been using do in order and do