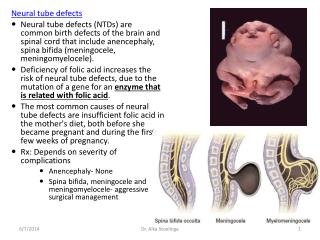 CHAPTER 4: IMPERFECTIONS IN SOLIDS - . issues to address. • what are the solidification mechanisms?. • what types of

Birth Defects Tracking and Prevention: Too Many States Are Not Making the Grade - . presentation by the trust for

Birth Defects - . what is an…. amniocentesis : the process of withdrawing a sample of the amniotic fluid surrounding

Infant Mortality, Birth Defects and other birth outcomes in Nunavut: The challenge of translating data collection into