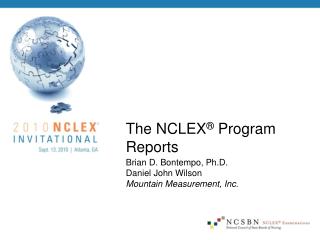 NCLEX ® is a Computerized Adaptive Test (CAT) - . how does it work?. every time the examinee answers a question, the

Reports and Passwords - . reports filter . from any cats page, click on reports in the top left of the page. reports

Program Evaluations - . is it program or project?. program evaluations. where do we get information for evaluations?.

NCLEX-RN EXAM PART 1 - WHAT IS IT? - . developing the exam. national council licensure examination for registered nurses