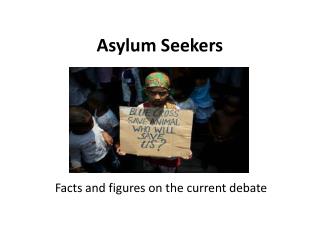 Asylum Seekers. Facts and figures on the current debate. Asylum seekers- Who are they?. Someone who leaves their own country in fear of their personal safety. Circumstances are often for Political reasons, sexual orientation or because of war. Who are asylum seekers? - . l. to explain why people are forced to seek asylum to understand the effects asylum seeking

Asylum Seekers are Illegal - We're being swamped by hordes of boat people . australia already takes too many refugees.

Refugees and asylum-seekers - . a presentation for schools. what is an asylum-seeker?. a person who has fled persecution

Lesson 6: Refugees and Asylum Seekers - . refugees and asylees. leave their countries because they fear being killed or

Refugees and Asylum Seekers in Australia - . refugee health fellow program nov 2015 – do not use after june 2016 .