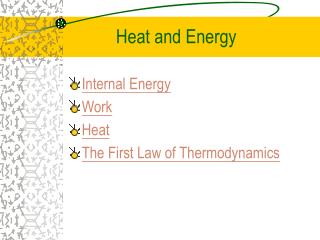 Heat and Heat Energy - . energy in matter. rub your hands together. what happened? you just used energy to make heat!

Heat and Energy - . heat and temperature. heat is a type of energy that will flow from a warm area to a colder one. for

Heat and Energy - . molecules and atoms ~ trillions in a dust particle. ~ always in motion……always. kinetic theory.

Heat and Energy - Quiz on acids &amp; bases at the beginning of class. take a few minutes and study!! pick up the two

Energy and Heat - . definitions. thermochemistry: the study of the energy changes that accompany chemical reactions

Heat and Energy - . energy is the ability to do work. work is done when a force causes an object to move in the direction

Heat and Energy - . chp 10. energy. the ability to do work or produce heat 2 types: kinetic due to motion affected by

Energy, Heat and Heat Transfer - . earth science intro unit. i will be able to describe energy and the two types of

HEAT ENERGY - . what is heat? form of energy and measured in joules particles move about more and take up more

HEAT ENERGY - . what is heat? form of energy and measured in joules particles move about more and take up more room if

Heat Energy - . 5 th grade. there are three ways heat can move through a system:. what is thermal energy

Heat Energy: - What is heat energy?. heat energy:. heat (thermal) energy is simply a type of energy ex. heat from a