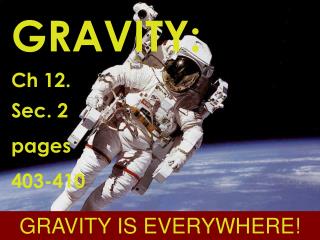 GRAVITY: Ch 12. Sec. 2 pages 403-410. GRAVITY IS EVERYWHERE!. A. GRAVITY. Minute Physics: What is gravity?. = The FORCE of ATTRACTION between ANY two objects. All matter (anything that has mass) has gravity …but it ’ s only noticeable between massive objects (like planets…). JSP – Java Server Pages - . representation and management of data on the internet. introduction. what is jsp good for?.