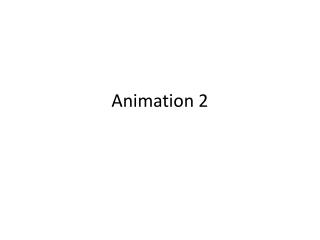 Animation 2. Traditional Animation. Also called cel animation or hand-drawn animation. Begins with a storyboard. A preliminary soundtrack is recorded. Penciled drawings are made by lead animators of keyframes Pencil tests are prepared NCFE Level 2 Animation - . what is it?. not a gcse like a btec but harder gcses are level 2 qualifications (a levels are

Animation - . lecture 8 razia nisar noorani. animation. the rapid display of a sequence of images of 2-d or 3-d artwork

Animation - . most games have moving components, how do we make things move? we will track the location of an object

Animation - . epistemology. and. ivy kidron ivy.kidron@weizmann.ac.il. the complexity of the.