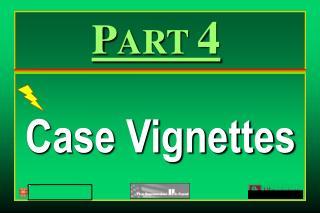 P ART 4. Case Vignettes. S TACY. Stacy, a 10-year-old girl, was in her fourth grade classroom when the planes struck the World Trade Center. Another student alerted the class to the black smoke that consumed the sky well after both buildings had already been hit. Customer Vignettes - . who is your target customer, really? consumers? businesses? customers vs. influencers? what do you

Four vignettes - . everyone can snoop what they have on you getting sensitive information from public data do-it-yourself

A few vignettes - . the great conundrum. understanding theoretical basis of disease vs explaining the phenomenon of