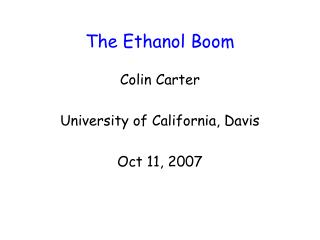 Experiment 8: - . bromination of stilbene: a green synthesis. objectives. to perform a green chemistry synthesis and

Railroads and American Politics - Agenda for topic 2: american politics, economics, and business prior to the railroads: Day 1 Boom Town - . when is money important, and when does it affect our lives?. what do you know about seasons?. turn

The magical world of BIOENERGY Social and political implications as well as some science - . emily j. may energy

Biofuels - . sustainable energy. what is biofuel?. a biofuel is a fuel that is sourced from non fossilized organisms or

presented at the Dutch Brokerage Event on Biorefinery and Biofuels January 18 th -19 th , 2007 Amsterdam, the N