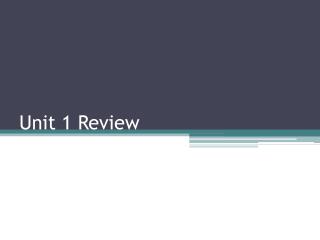 Unit 1 Review. Intro. Native Americans. Origin Myths. Iroquois Constitution. Dekandawidah proposed a constitution to the 5 Iroquois nations. Made ritual for when candidate lord was installed. Said the leaders should be thick skinned – not easily offended.

Unit 1 Review - . question 1. which of the following is an observation about our classroom? we are in a science class it

Unit one review - . ch. 1 through 3. econ 53. describe the characteristics of command, market, traditional and mixed

Unit 1 Review - . ap biology lchs. water's high specific heat is mainly a consequence of the a. small size of the water

Unit 1: Place Value REVIEW - . i can read and write decimals to the thousandths. i can explain how t he location of each

Unit 1 Review - . this is a short review for the upcoming unit 1 test. run through this game a few times to make sure you

Vocabulary Unit 1 Review (again) - . (v.) to caution or advise against something; to scold mildly; to remind of a duty.

Unit 1 Review - . 11 open religion test = tomorrow!. what is religious impulse?. when someone does not believe in god a