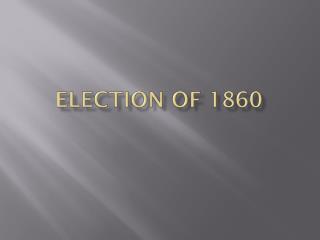 Election of 1860. Missouri Compromise. Compromise of 1850. Kansas-Nebraska Act. “A house divided against itself cannot stand.” Emergence of Abraham Lincoln.

The 1860 Presidential Election in Missouri - . road map. the 1860 election in missouri: teaching opportunities the

The Start of The Civil War: Harper’s Ferry, Election of 1860 &amp; Secession - . us history: spiconardi .

The Lincoln – Douglas Debates and The Election of 1860 - . republican party lincoln and douglas debates. 1858 a series

Section 4 - Lincoln’s Election and Southern Secession Find Out: - Why the democratic party split in the election of

THE UNION IN PERIL: CAUSES OF THE CIVIL WAR CHAPTER 15 - . section 4 birth of the republican party why were new political

Election of 1860 – Dividing Virginia - . who were the major candidates and what were the issues in the election of