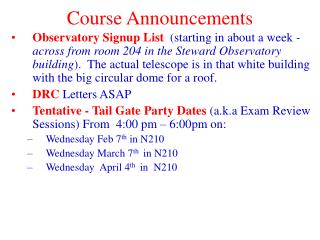 Course Announcements. Observatory Signup List (starting in about a week - across from room 204 in the Steward Observatory building ). The actual telescope is in that white building with the big circular dome for a roof. DRC Letters ASAP Announcements - . difference between “excused” and “absent” office hours next week may not be here monday

The Relational Model - . cs145 lecture 2 september 24, 2014. announcements. piazza works! there are links on the page

Announcements - . none for today! keep doing a good job!. lecture 2. well-documented!. the gpu pipeline. tips for

Announcements (07-April-2008) - . questions / discussions on the following will be taken after the break project