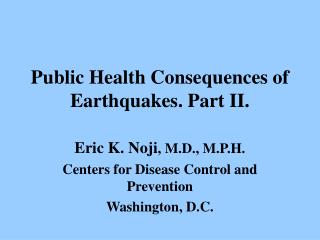 Earthquake Cause and Effect - . homework and review questions. what causes an earthquake?. what is a fault?. what is the

Learning Objectives : To know the primary and secondary effects of earthquakes - Coping with earthquakes and eruptions.

Effects of Natural Disasters - . jayda shamblee 706. introduction. natural disasters can happen any time. but the true

Earthquakes - . chapter 3. earthquakes. what we need to know about the hazards of earthquakes understand how scientists